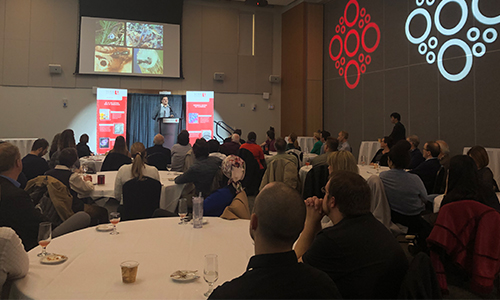 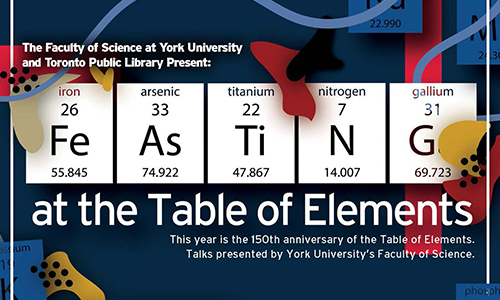 The Faculty of Science wrapped up its public lecture series at the Toronto Public Library, titled Feasting at the Table of Elements. Thank you to Chemistry Professors Chris Caputo, Cora Young, Pierre Potvin, Hovig Kouyoumdjian and Derek Jackson for participating and presenting engaging talks in the community.

At the Graduate Studies Scholars Reception, recent MSc graduate Azizia Wahedi (supervised by Jean-Paul Paluzzi, Biology) was presented the Thesis & Dissertation Prize for her “Characterization of the Adipokinetic Hormone/Corazonin-Related Peptide Signaling System in the Mosquito.” In addition, PhD student Paige Whyte-Fagundes (supervised by Georg Zoidl, Biology), recipient of the Susan Mann Dissertation Scholarship, spoke about her research on a particular protein channel in the zebrafish that could lead to important developments in understanding epilepsy. See the story in yFile.

Dawn Bazely (Biology) and Steven Alsop (Faculty of Education) created an open-access archive of the extensive research conducted in Churchill over decades by scientists from around the world. YFile covered the story.

Hélène Mialet (Science & Technology Studies) presented several talks: “Tracing metrologies from Concord California to Paris” at TIK, Center for Technology, Innovation and Culture (Oslo); “Animals in Translation,” at Centre for Advanced Study, Academy of Science and Letters (Oslo); and “Managing the Self through Dogs and Machines in the Heart of Silicon Valley” at the Society for the History of Technology (Milan).

Laurence Packer (Biology) presented at the “Classifying the new?” event hosted by the Fields Institute for Research in Mathematical Sciences.

Research by Gary Sweeney (Biology) and his PhD student James Jahng on the impact of iron overload on insulin sensitivity was covered by Brainstorm, a special edition of yFile.

Rob McLaren (Chemistry) and his team published Estimation of NOx and SO2 emissions from Sarnia, Ontario, using a mobile MAX-DOAS (Multi-AXis Differential Optical Absorption Spectroscopy) and a NOx analyzer in Atmospheric Chemistry and Physics. The study established a modified technique for measuring the emissions of pollutants from small cities and other small footprint areas, using Mobile MAX_DOAS. In doing so, the team estimated total emissions of NOx and SO2 from the city of Sarnia.

PhD student Yisub Kye (supervised by Ed Furman, Mathematics & Statstics) published Computing the Gini index: A note in Economics Letters. The paper sheds new light on the meaning of the famous Gini index of income inequality and shows a convenient way to compute the index for virtually any statistical distribution of income.

The measurement of the proton’s size by Eric Hessels (Physics & Astronomy) and his team was covered in the print and online edition of Scientific American. The article was written by Dan Falk, former York Science Communicator in Residence.

Amro Zayed’s (Biology) project on developing a health diagnosis tool for bees continued to receive coverage in the media by The Weather Network and Narcity.

Deborah Harris (Physics & Astronomy) spoke to Quanta Magazine about neutrinos and antineutrinos, in an article covering the unexpected discovery of a simple math formula by physicists studying the particles.

Paul Delaney (Physics & Astronomy) spoke to a number of media outlets about Mercury transit and retrograde, including The Globe and Mail, Global News, CTV News, AM640, and AM1010; he also spoke to AM640, and AM1010 about cookies in space and voyager 2.

Until Mar 11 – The Aquatic Research Group (ARG) Seminar Series 2019/2020 features talks on everything from microplastics, pharmaceuticals, road salt, mercury and more that end up in our waterways.