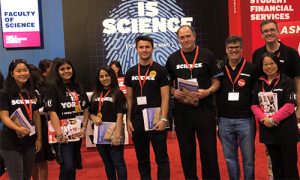 Thank you to all of the Faculty of Science staff, faculty and students who participated in the 2018 Ontario Universities Fair. 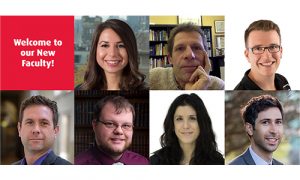 Sapna Sharma (Biology) and former York Science Communicator Matt McGrath are featured in a new Did YU Know video that discusses some of the causes of water shortages around the world.

Alumna Pamela Ohashi (BSc 1982) received the Robert L. Noble Award from the Canadian Cancer Society for her research on the role of the immune system in the development and progression of cancer.

YFile profiled Science Saturdays, which are offered by the Science Engagement Programs office in the Faculty of Science and begin October 13.

YFile featured research by Chun Peng (Biology) that showed that microRNA miR-218-5p is a key contributor to the development of preeclampsia, a complication of pregnancy.

Cora Young (Chemistry) presented a talk on Arctic pollution as part of the Toronto Public Library’s “Our Fragile Planet” series.

The Department of Physics and Astronomy launched a new website.

Kenton Kroker (Science and Technology Studies) delivered the John Augustine Lecture, “How to be a Scientific Physician in Ontario, circa 1882,” at the Lakehead Summer School 2018 for the Thunder Bay Medical Society. He also presented “Epidemic Encephalitis & the Emotional Reconfiguration of Interwar Britain” at the Northern Ontario School of Medicine.

Christopher Lortie (Biology) was interviewed for a 2 Minutes, 3 Questions video produced by the VPRI’s office at York University.

Paul Delaney (Physics & Astronomy) spoke to CTV News, Surius XM, AM640, 630CHED, AM1010 about Elon Musk and the tourist to the Moon mission. He also spoke to a number of the radio outlets (including some of the above) about Sunspot closure, light and gravity waves, 40 Eridani A and planet Vulcan, and the Pluto Planet debate.