York University is now home to a new one-metre custom telescope that will enhance hands-on learning experiences and undergraduate research opportunities for the York community and beyond.

Installed at the Allan I. Carswell Observatory on Aug. 16, the telescope is expected to be the largest situated on a university campus in Canada.

A crane worked to hoist equipment into the air and then carefully lower each piece into the dome of the observatory. The equipment that was dangling over campus weighed about 4,400 pounds – almost as much as an elephant. Inside the observatory, workers assembled the telescope piece by piece as each crate was hoisted down into the dome and unpacked.

The telescope will give students, astronomers and members of the public a closer look at the wonders of the night sky. The telescope’s larger aperture will provide a deeper view into space, distant galaxies and cosmic objects, and make it easier to see Saturn’s rings, the Great Red Spot on Jupiter and the polar caps on Mars.

The completed telescope is expected to be open to public viewing in October.

The project is funded through a $500,000 donation from the Carswell Family Foundation, matched by York University and its Faculty of Science, for a total investment of $1 million. This gift is a part of Impact, The Campaign for York University, and supports its pillars of building stronger communities and mobilizing new ways of thinking. The observatory at York has been a prominent hub for science outreach to the broader community since 1969. About 5,000 visitors a year come for public viewing on Wednesday nights and there are online viewing opportunities for scores more on Monday nights, when York students and faculty host the popular “YorkUniverse” radio show on astronomy.fm. That’s when members of the public from around the world can request the telescope be pointed to their favorite celestial target. In recent years, the observatory has also become a popular venue for marriage proposals. 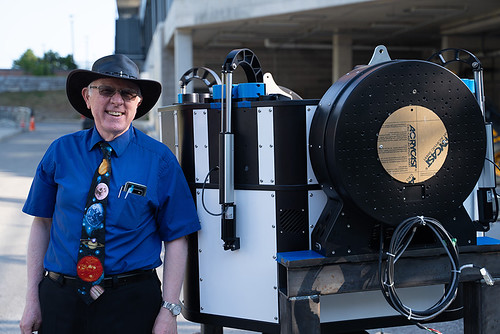 The observatory is already home to a fleet of astronomical telescopes, including 60-centimetre and 40-centimetre Cassegrains, and five 20-centimetre telescopes, which were used recently for the partial solar eclipse, attracting about 2,000 community members to York’s Keele Campus.

Watch a video below of Professor Paul Delaney explaining how the telescope will benefit York U and the wider community: